Time in my OD&D Campaign

I was running an OD&D game world when the first three AD&D books were published, and I resisted for a while, but of course made the purchases.

I read the new Dungeon Masters Guide cover to cover more than once while planning my new campaign world.  The section on Time, found on pages 37 and 38, struck me as especially important. 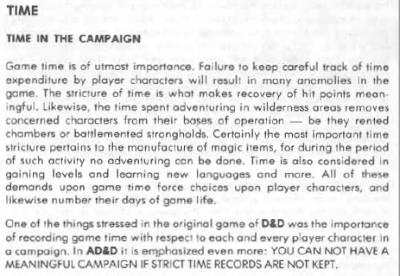 The subsequent seven paragraphs elaborate upon the subject, including examples and advice on calendars.  When I finally scrapped my OD&D game and started a new campaign world using AD&D, I started the game calendar on the 1st day of the year 1000.  I'm sure it was NOT a coincidence that this mirrrored exactly the example given in the DMG!   I used 30 day months, but kept real world month and day names.  That campaign was played throughout high school and on visits home from college, but it ended when I went on active duty in the Air Force.

During my first AF assignment, I convinced my wife and some friends to play, and I started a new campaign world using mostly 1e but with the 2e PHB and DMG.  This time around, I created a calendar from scratch.  I've been searching for the notes I put together when I devised this calendar, but have been unable to find them.  All I've got right now are two excerpts from the Primer I wrote for my players at the time: 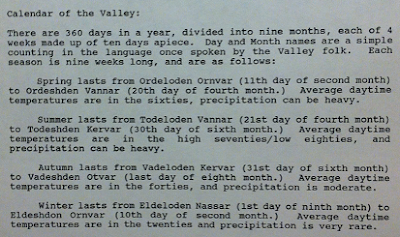 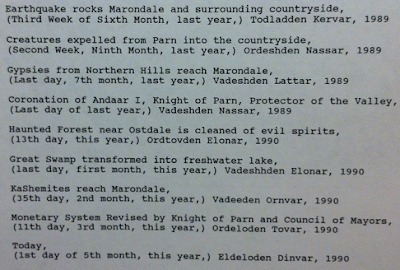 The campaign calendar started early in 1989, and most of the events in this list were triggered in one way or another by the PCs.

Between the two, I have all the month names:  Elonar, Ornvar, Tovar, Vannar, Dinvar, Kervar, Lattar, Otvar, and Nassar.  Sadly, I don't have enough of the days to reconstruct the rest, but I still hope to find my old notes someday.

When I decided to run a new OD&D Campaign for my son and his friends, I knew I had to track time, and I even started doing session reports on Exploring the Outside Inn.  I dropped the ball on the session reports but have kept notes and a spreadsheet from every session.  I've run between 63 and 73 sessions in my OD&D campaign world so far, between two active groups of players, but clearly I haven't done as well as I should have with timekeeping.  I start each session telling my players the season, the current weather, and how long it's been since they last adventured, but I really need to go back through my notes for each session and put together a clean timeline, and a new calendar!
Posted by Dave at 8:45 PM